[ Major progresses and achievements after the 3d ICRER Conference in Barcelona, Spain, Sept. 2014 ]

The 3rd International Conference on Radioecology and Environmental Radioactivity has been quite successfully held in Barcelona, Spain, from 7 to 12 September 2014, with 430 participants from 46 countries. You can download here geographical statistics about participants.
Abstracts are available on the Conference website:
https://intranet.pacifico-meetings.com/amsysweb/publicacionOnline.jsf?id=146

The “FORUM”, a collective initiative prompted by IUR to promote worldwide harmonization of Radioecology networks, was launched on September 10th, 2014, on the occasion of the 3d ICRER conference held in Barcelona (Spain). The fifteen initial founding networks members of the FORUM produced a synthetic overview on the discussions held and the decisions made. A collective proposal was made that the IUR should take the lead in operating the “FORUM” as a tool to promote radioecology internationally, with three key objectives:

(1) communication, both among regional and technical radioecology networks and with other networks with an interest in the application of the results of radioecology,

More details about the FORUM

An IAEA Panel Workshop entitled: “Radiological Protection of the Environment: The challenge to move from research to international regulation” has been held on September 10th, 2014, in Barcelona, as a side event of the 3d ICRER Conference. A Panel formed with representatives from IAEA, UNSCEAR, ICRP, IUR, EC, OECD/NEA and IAEA Member States, has been addressing 3 main questions related to the protection of the environment topic:

- Which are the reasons for the reluctance of nuclear regulators to incorporate the progress in understanding and scientific knowledge? Which is the role of researchers in fostering the development and applications of regulations?

- Which are the weakness and the strength of the ICRP approach? Do we need alternatives or major improvements? If yes, how long should we wait? How far should science go, having in mind the relevance of problem to be regulated?

- What can be done to enhance the acceptance of the current approaches despite their limitations?

The minutes of the Workshop discussions held will be released soon.

See the Workshop motivations and programme

Brit Salbu, Professor at the Norwegian University of Life sciences, received the 4th IUR V.I. Vernadsky award in recognition of her outstanding contribution to the development and dissemination of Radioecology. She is currently head of the Isotope Laboratory and Director of the Center of excellence for Environmental Radioactivity (CERAD).

On the occasion of the ICRER 2014 Conference, three young researchers have been granted the IUR Young Investigator Award for the outstanding quality of their research work and reporting at the conference. The awardees were:

After holding an open international scientific seminar in Stockholm University on  December the 18th, 2013, entitled “Ecosystem Approach Seminar - how can Ecosystem Approach be used in protection of the environment from toxic substances?”, the Task Group prepared, and presented in plenary at ICRER, a discussion paper that was published in JER (Bradshaw et al., 2014, Journal of Environmental Radioactivity, 136: 98-104) highlighting the need to complement the methodology based upon reference organisms which is currently proposed to assess risk from radiation to the environment with additional method(s) along an ecosystem approach.

See the programme of the scientific Seminar

As a side event of the last ICRER Conference in Barcelona, the Ring of five (Ro5) network has held its first enlarged international workshop on Sunday 7 September, 2014. This workshop was organized by the French Institute for Radiological Protection and Nuclear Safety (IRSN) under the aegis of the International Union of Radioecology (IUR) and with the support of the Norwegian Radiation Protection Authority (NRPA).

Fifty five attendees participated to this first edition with 18 oral communications and 8 posters. Knowledge on low-level atmospheric radioactivity is of primary importance since it makes it possible to size the consequences of any atmospheric release in case of a radiological event, whatever its magnitude. Teams and laboratories that own such high sensitiveness are also able to study the reasons for any significant increase and to study the mechanisms involved in radionuclide atmospheric transfers and interactions between the atmosphere and other compartments of the biosphere.

On the occasion of this first workshop, findings related to recent trace events characterization; methodologies, organizations and a special focus on iodine were presented. Beside technical and scientific discussions it has been proposed to create sub-groups based on prior identification of on-going and future R&D priorities established in the framework of the FORUM initiative.

As a first start, 3 main Ro5’s subgroups would rapidly see the light of day. It was also adopted that this network worth entering a new era of information exchange through the IUR website and the Ro5’s task group dedicated web pages. Finally a proposal has been made to host the next Ro5 workshop on the Baltic shore in northern Germany. 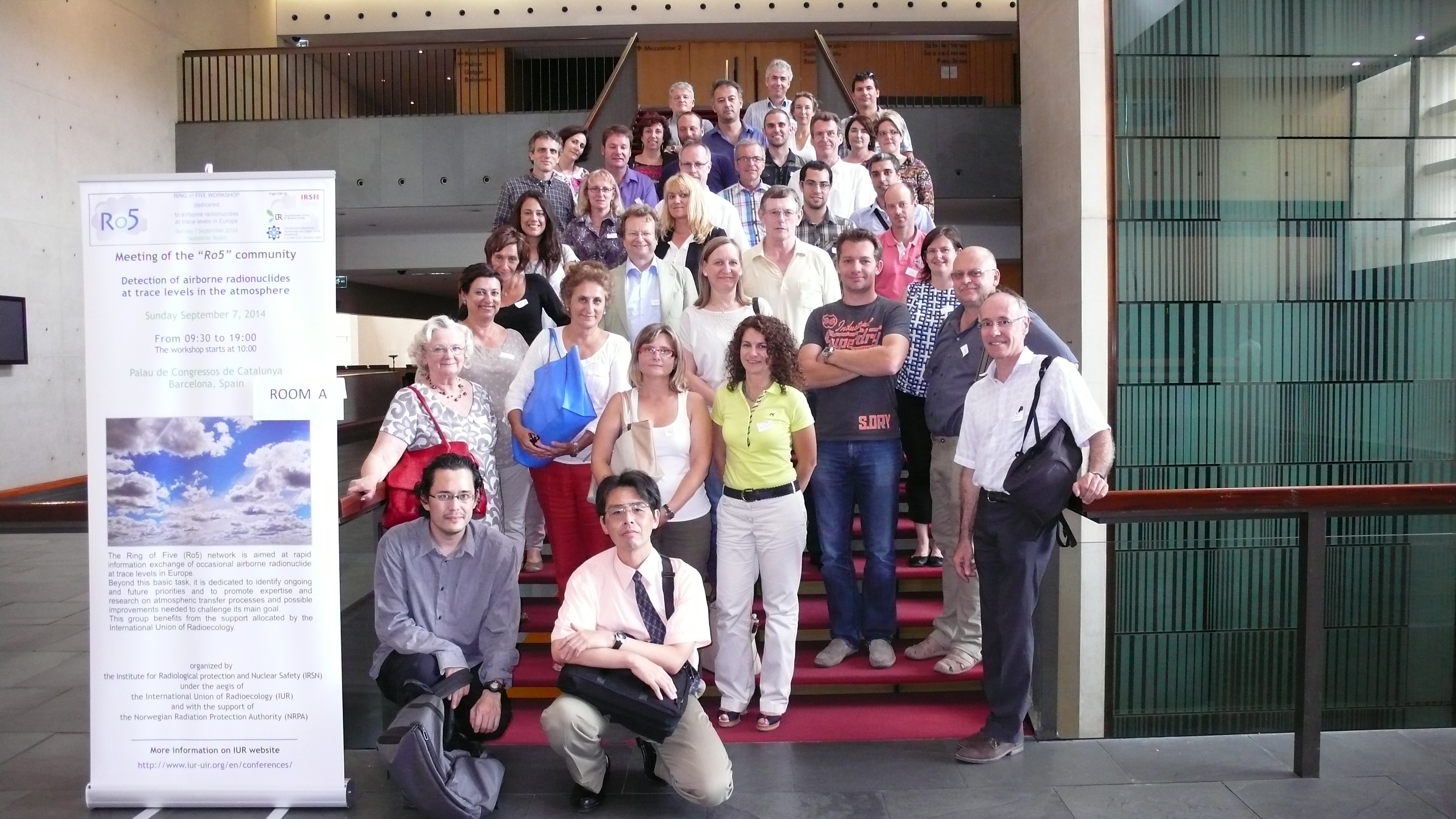 Some attendees of the Ro5 workshop

As a side event of the 3d ICRER Conference, the XXXVI General Assembly of IUR has been held on September 11th, 2014, with about 5O participants attending the discussions. Important issues highlighted were:

The most recent updates will be reviewed at three International conferences currently planned to take place in Japan in 2015. The first two will address the post-Fukushima progresses directly, and another one is to address Biosphere contaminated with artificial and natural radionuclides.

13th International Conference on the Biogeochemistry of Trace Elements

Main Themes of the Conference

• Natural abundance and behavior of trace elements in the environments

• Advances in toxicology and risk assessment

Behaviour of NORM and artificial radionuclides in the environment

H08. Extent and impact of biospheric contamination with artificial and natural radionuclides by human activities

The ALLIANCE was established in 2009 with the firm conviction of the eight founding organizations of that, working in a coordinated manner and combining their efforts, would enhance the competences of the radioecology science in Europe. At present, the ALLIANCE has a membership of 20 organizations from 14 countries (Belgium, Croatia, Spain, Finland, France, Greece, Ireland, Kazakhstan, Norway, Portugal, Poland, Sweden and the UK).

The main objective of the European Radioecology Alliance is to gradually strengthen coordination and integration of research in the field of radioecology at national, European and international level. The ALLIANCE also aims to act as a research platform and in this sense has developed, in collaboration with the European projects STAR and COMET, a Strategic Research Agenda (SRA).

COMET- Co-ordination and Implementation of a Pan-European Instrument for Radioecology was presented at ICRER 2014.

COMET started in June 2013 and will last for 4 years. With COMET, we aim to strengthen the pan-European research initiative on the impact of radiation on man and the environment by facilitating the integration of radioecological research, including both the human food chain and the protection of wildlife. The project will build upon, and compliment, the foundations laid by the European Radioecology Alliance (ALLIANCE) and the on-going FP7 STAR Network of Excellence in radioecology.

The COMET consortium counted thirteen partners in Sept 2014 and seven more organisations joined COMET from October 2014 onwards. Through COMET, capacity, competence and skills in radioecology will be strengthened at a pan-European level.

Radioecology progresses in the CIS countries (to come)