Obituary: In memory of an outstanding scientist, Yuri Antonievich Israel 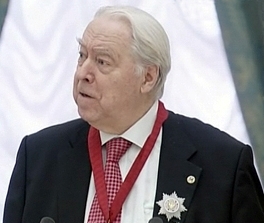 On 23 January 2014 passed away an outstanding scientist, promoter of science and public figure academician of the Russian Academy of Sciences Yuri Antonievich Israel.

In 1978 Yu.A. Israel organized and headed the Laboratory for monitoring of natural environments and climate of the State Committee and Academy of Sciences which in 1990 was reorganized to the Institute of Global Climate and Ecology of Roshydromet and Russian Academy of Sciences whose permanent director he was till 2011.

Yuri Antonievich made a great contribution to radioecology. The terms “radioactivity” and “environment” were amongst the basic words in a rich vocabulary of Yu. A. Israel. He was indisputable authority in a wide range of problems related to radioactive contamination of the environment and radionuclide migration in it.

One of the benchmarks of his work was studying the problem of nuclear tests in geophysical, ecological and meteorological aspects. He investigated regularities of dispersion of radioactive substances from nuclear explosions in the atmosphere, their fallout on the Earth’s surface and subsequent radionuclide transfer in different natural environments. Yu.A. Israel was a pioneer in the field of radionuclide fractionation in the decay chains in different forms of fallout. He defined the general idea of global contamination after the nuclear weapons tests. His works at the Semipalatinsk and Novaya Zemlya USSR nuclear test sites were not only well investigative and scientific but needed personal courage. In 1955, when in the USSR for the first time in the world a megaton bomb was tested, Yuri Antonievich on board the reconnaissance aircraft measured parameters of radioactive cloud and level of radioactive contamination of the locality. With the same courage he later descended to the crater floor from a new nuclear explosion to experimentally verify the calculations of researchers.

One more noticeable area of his investigations were works on nuclear geophysics and radioecology in regions of large radiation accidents with the release of radionuclides to the environment – Kyshtym in 1957 at the PP “Mayak” with the formation of the East-Urals Radioactive Trail and Chernobyl in 1986, as well as in areas of peaceful nuclear detonations.

Yu.A. Israel markedly contributed to the development of modern views on the role of climate change on the Earth under the influence of current anthropogenesis. In 2007, an Intergovernmental group of experts on climate change, Yu.A. Israel being within the group, was awarded the Nobel peace prize.

Yu.A. Israel played a distinguished role in organization and scientific support of activities to mitigate impacts of the Chernobyl accident.

The results of radioecological studies within the territories affected by radioactive contamination are unique cartographic materials – atlases produced under the guidance of Yu.A. Israel: “Atlas of East-Urals and Karachai Radioactive Trails Including Bounds till 2047”, “Atlas of Current and Forecast Aspects of the Chernobyl Impacts in the Affected Areas of Russia and Belorussia”, atlas of radioactive contamination of Europe by cesium-137 after the Chernobyl NPP accident.

Yu.A. Israel is the author of 24 scientific monographs and more than 250 scientific papers. He is a Honorary Member of IUR.

People around him were always attracted by his kindness, wish to respond to any appeal.

Yuri Antonievich Israel will always be in the memory of his numerous pupils and followers.